What is a Calculator? 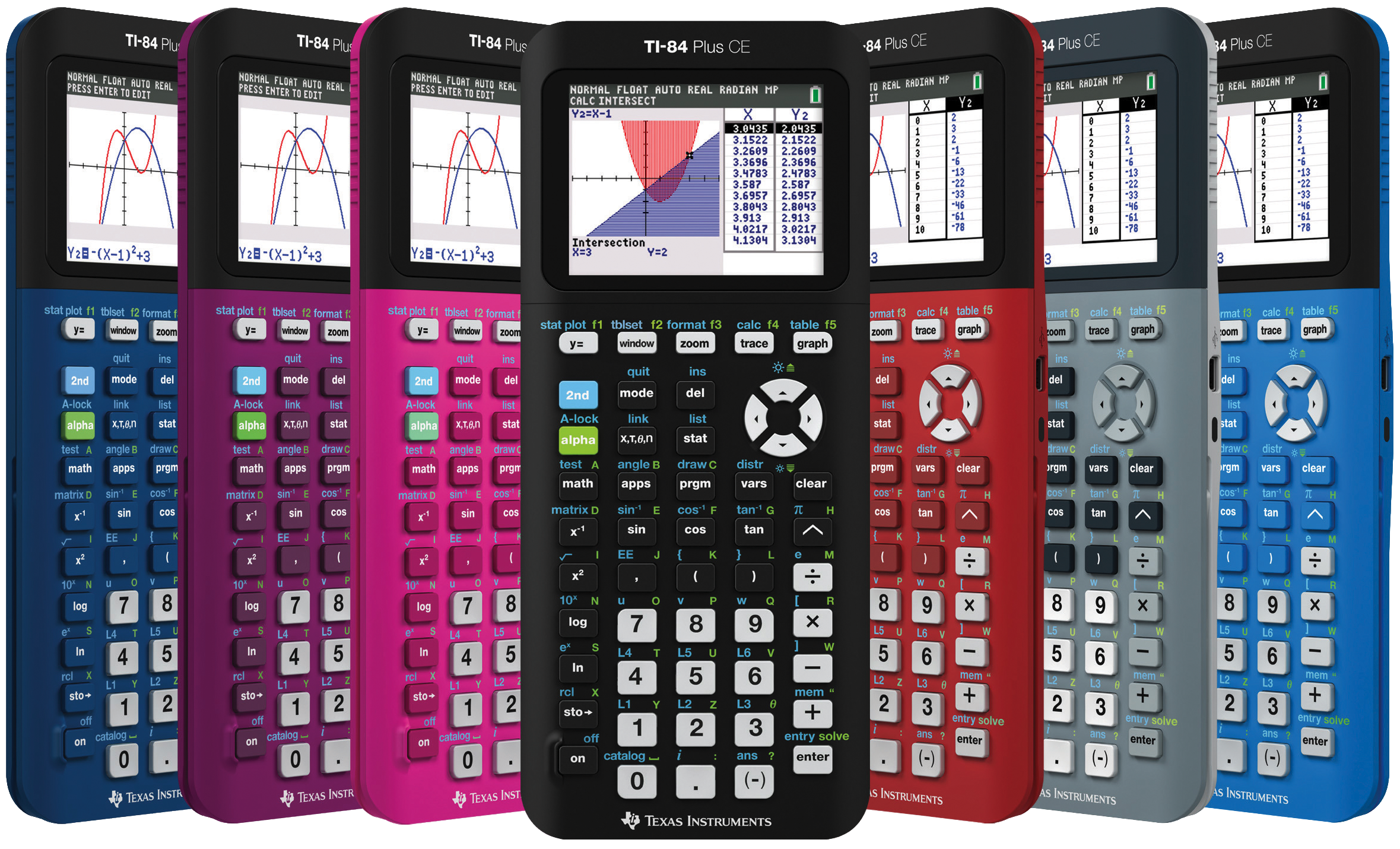 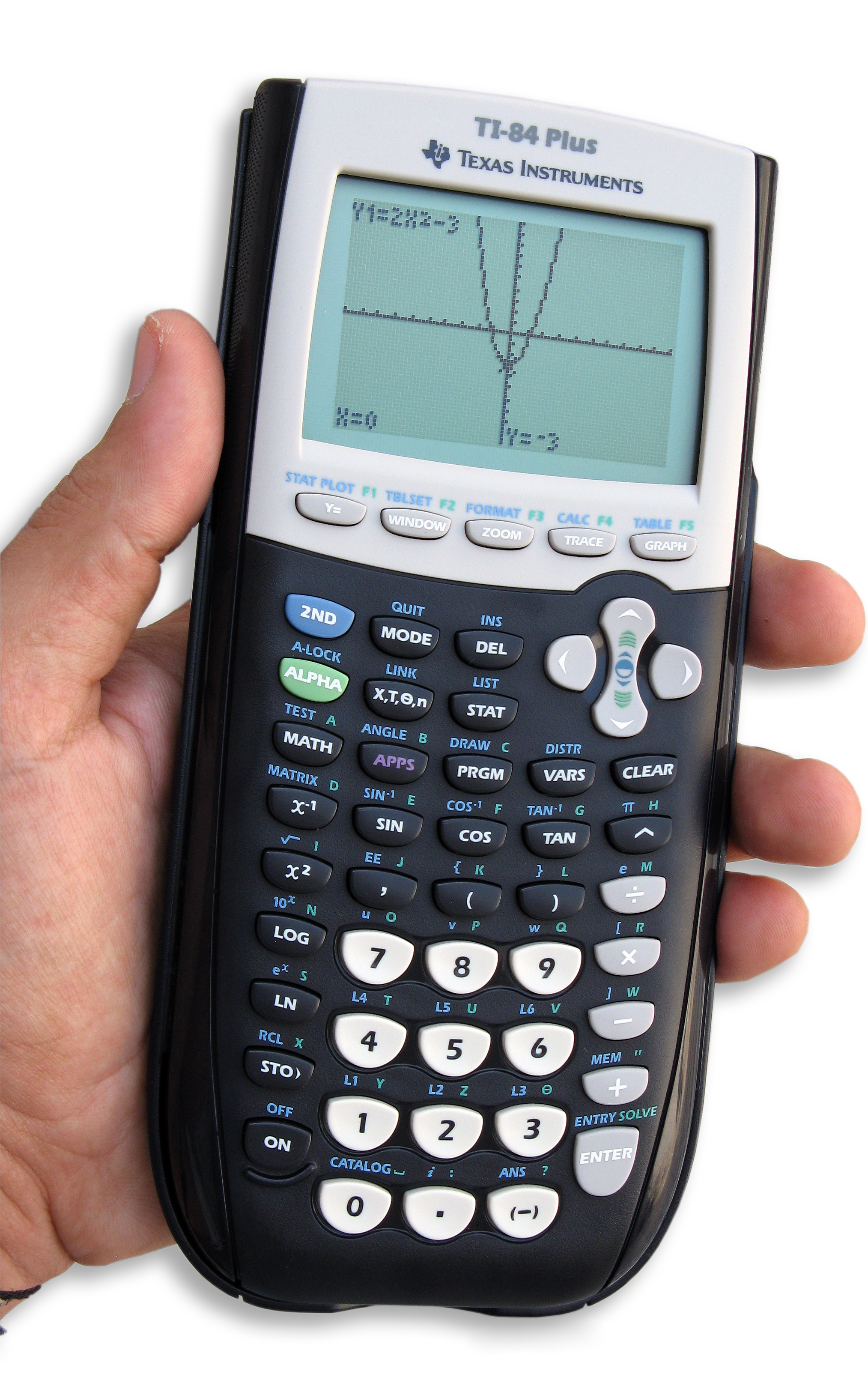 Early calculators were not as we think of them today. They were mainly tools to help count and tally, like pebbles, bones, and the abacus. These were known to have been used by the Sumerians and Egyptians as early as 2000 BCE, but the first real mechanical calculators show up in the early 1600s. These were the geometric-military compass, logarithms and Napier bones, and the slide rule. In 1642, the mechanical calculator (by Wilhelm Schickard) was invented, and was usually claimed to be able to perform all 4 basic calculations with minimum human intervention, but this was mostly over advertisement, as it could only add and subtract and only by repetition could the other two functions be obtained. 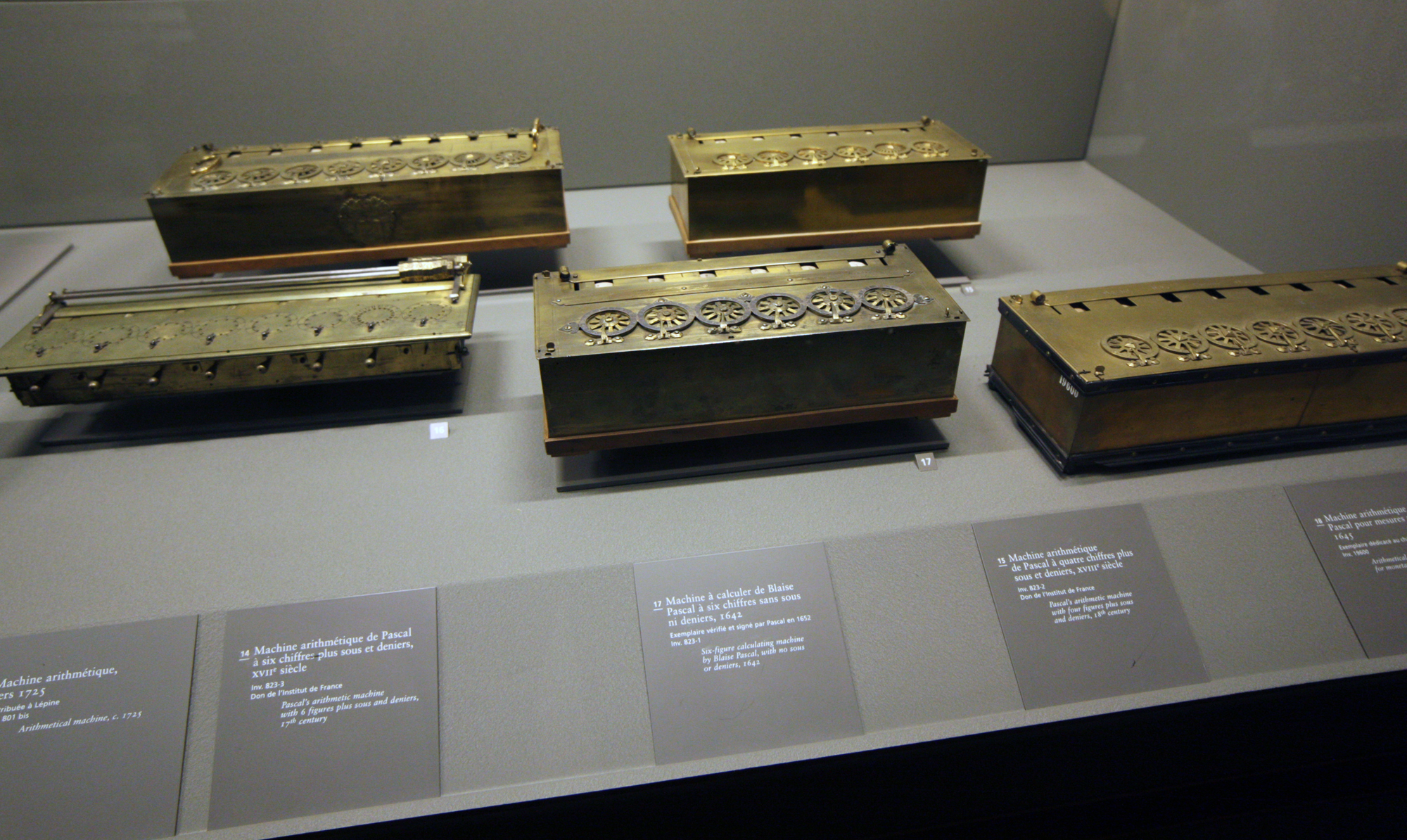 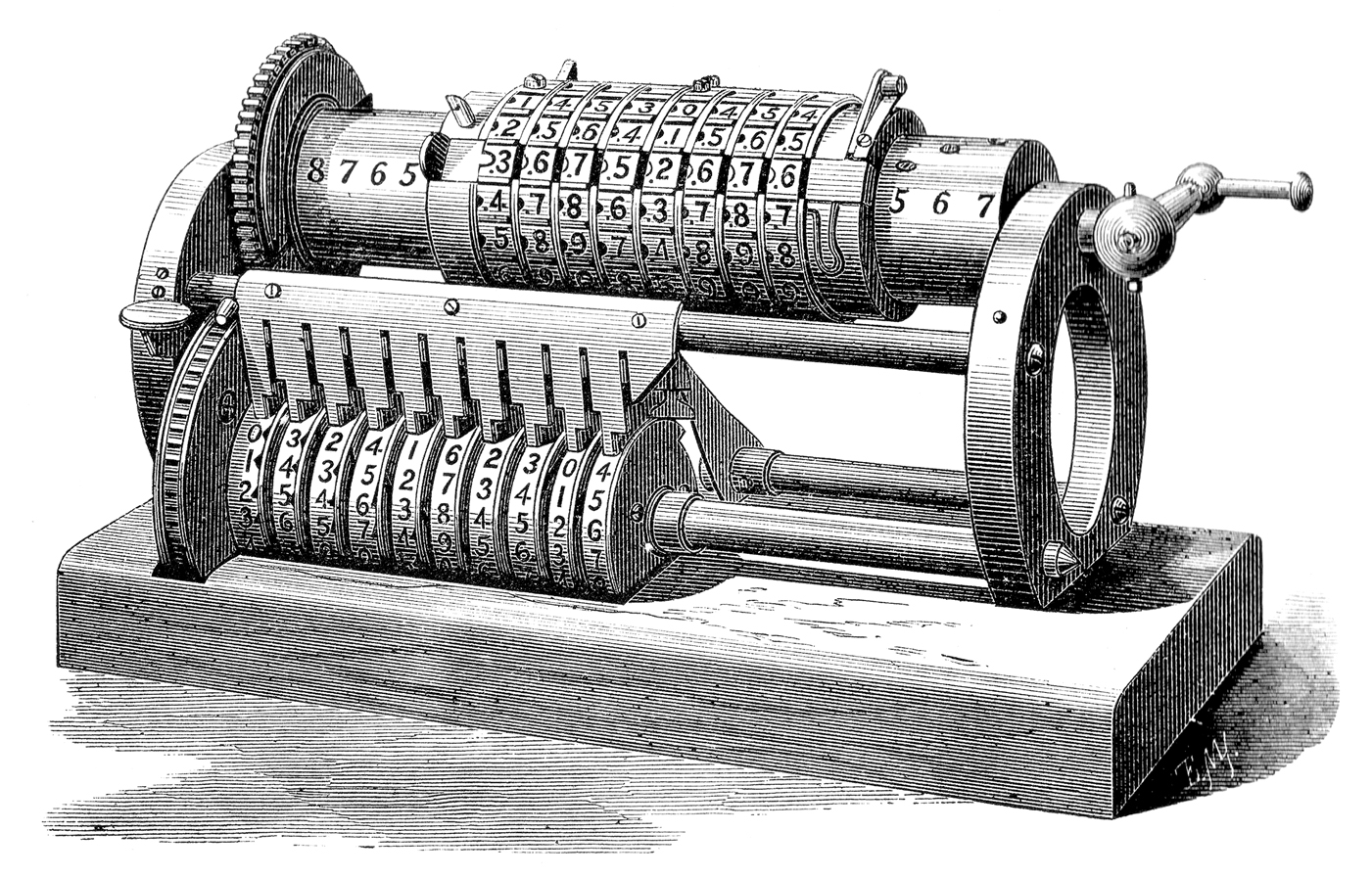 These not quite complete calculators were followed by a attempt by Gottfried Leibnitz who spent 40 years completing a 4 operation mechanical calculator, inventing during the process the Leibniz wheel, but untimately couldn't design a fully operational wheel. In the 18th century several large improvements were made, including a mechanical clock made by Giovanni Poleni that was the first succesful machine to do all four mathematical operations. However, these machines made in the 1700s were aways one-of-a-kind, and not untill the industrial revolution was real progress made. In the indutrial revolution the processes of manufacturing and fabrication of mechanical calculators. The Arithmometer, which was invented in 1820 as a four operation mechanical calculator, was by far the most succesful of the commercialy available adding machines, as over 2,500 units were sold.

Not until 1902 was the familiar push-button interface developed.

The first mainframe computers, with vacuum tubes and next with transistors, were dveloped in the 1940s to 50s. This electronic technology would provide a stepping stone for the first electronic calculators. In 1957 the Casio Computer Company, in Japan, released the Model 14-A calculator. This was the first all-electric and somewhat minorly compact calculator. It was based on relay technology, which was built into a desk. In 1961, the world's first all electronic desktop calculator was released, the British Bell Punch/Sumlock comptometer ANITA (A New Inspiration To Arithmetic/Acounting). This machine used vacuum tubes, cold-cathode tubes, and dekatrons in its circuits, with 12 cold-cathode "Nixie" tubes for its display. Originally there were 2 models, the Mk VII and the Mk VIII. However, the Mk VIII had a simpler mode of operation and the VII was eventually scrapped in favor of it.

The tube technology that was utilized in the ANITA was eventually superseded by the Friden EC-130, which was all transistors. This calculator also introduced reverse polish notation (RPN) to the market and was for the price of $2200, or three times the cost of a normal mechanical calculator of the time.
In 1964, Sharp introduced the CS-10A at $4130.73, and Industria Macchine Elettroniche introduced the IME 84. Following these were a large series of electronic calculator models from many manufacturers.

The first pocket claculator ever was the Busicom LE-120A "HANDY", originally marketed in 1971. This was made possible by the invention of the microchip, which let the hundreds of transistors in previous calculators to be condensed into a single silicon chip, allowing calculators to be many times smaller and less power-hungry. This calculator was the first to use an LED display, and also the first to run off replaceable batteries.
One of the low cost calculators was the Sinclair Cambridge, costing obly $45.76 at the time. This calculator was succesful due to its low cost, but was generally less reliable at transcendental functions. Also, by the end of the decade similar calculators cost less than $10.

During this period of time, Hewlett-Packard (HP) released the first scientific calculator that could approximate the abilities of a slide rule, the HP-35, for $395. It had 35 buttons and was based on the Mostek Mk6020 chip.
In 1973, Texas Instruments (TI) released the SR-10, a pocket size algebraic entry calculator for $150. In the following years, TI released several more calculators to rival the HP-35, including the TI-30 series which is still produced today.

The first programmable calculators wer produced in the 1960s by Mathatronics and Casio (AL-1000), but these were bulky and extremely expensive. The first progammable pocket calculator was the HP-65 which was built in 1974. It had a capacity of 100 instructions, and could store and retreive programs with a built in magnetic card reader.
In 1976, the HP-25C introduced continuous memory, i.e., programs were stored in CMOS memory during power-off. In 1979, HP released the first alphanumeric, programmable, and expandable calculator, the HP-41C. It could be expanded with RAM and ROM modules, peripherals like bar code readers, and miscellaneus communication interfaces.

In the early stages of electric calculators, liquid-crystal displays (LCDs) were just being developed and there was concern they would have an extremely short lifespan, so LEDs were used instead. These took large amounts of energy, and forced handheld calculators to just hours of battery.
When Busicom introduced the Busicom LE-120A "HANDY" calculator, they announced that they would follow it with the Busicom LC, which was to have a LCD display. However, the LCD display had problems and the calculator was never produced.
The first succesful calculator to have an LCD was manufactured by Rockwell International and sold from 1972 by other companies with other names. The drawback with these calculators is they lit the LCD with a filament lamp and solid plastic light guide, completely negating the low power consumption of the LCD, and they only sold for a year or two.
A more succesful calculator that had an LCD display was the Sharp EL-805, which was a slim pocket calculator using the reflective DSM-LCD and was launched in 1972.
LCDs led the way to the first credit card sized calculators, like the casio mini card LC-78 of 1978.

In 1971, the first computer-on-a-chip calculators were released, but Integrated Circuits (ICs) were still being developed and the yield was low and the cost was high. Many calculators continued to use 2 or more ICs, especially the scientific and programmable ones. However, given better and better technology, almost all calculators ended up with only one chip, greatly reducing the cost.
Another great thing that happened in the field of ICs was the reduction of the current draw of the chips. This was enabled by CMOS chips, which had less current draw due to more efficient resistors. This enabled the technology of solar power to be used in calculators, as evidenced by the first solar powered calculators, the sharp EL-8026 and the Teal Photon.

The first graphing calculator ever was the Casio fx-700g, reeased in 1985. Bothe Texas Instruments (TI) and Hewlett-Packard (HP) contunued to resease feature laden calculators, untill the line between a personal computer and a graphing calculator was very thin, as some extremely advanced calculators like the TI-89 and the HP-49G could differentiate and integrate functions, solve differential equations, and run word processing and PIM software.

Around the world, calculator are used by students to assist in schoolwork, but there is some resistance to the usage of calculators before a certain level of proficiency in the operations is acheived, and several people voice concerns that children are becominf to dependent on calculators for arithmetic.